So once again, winter has been reasonably productive; no brutal illnesses this year, but the general malaise was pretty constant. I truly despise the winters here. It's March 21 and it feels like February 12. Meanwhile, back home Mom is out in the yard getting her gardens ready for planting...sucks, dude.

But the new site update is going well. Again, just a little slowly. The actually paying jobs have to take priority, right? But here is a teaser shot: 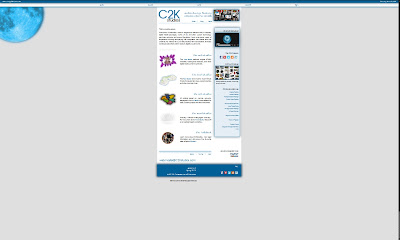 Recently I've run into a couple of major snags. I've been playing around on Xtranormal.com for a while, but now, since things are starting to come together and I plan to really reach out globally soon as opposed to just sort of locally, I have to really be cognizant of the legal issues regarding what content I can use.

Turns out Xtranormal.com charges $50/month for commercial usage...that's too rich for my blood right now, but even if it weren't, when you read the TOS the whole thing starts to sound not worth it so much. I guess to a corporation what's $50 a month but to someone like me...so I've had to retire Joe Robot (for now) and come up with a new marketing strategy. I have one, but now I just have to spend time and energy on it that I have to find somehow. There isn't much of either to go around right now.

Animoto.com was another gem that I would have liked to incorporate but at $25/month that too is still too much for me right now.

So ya, it looks like I'm going to have to redo ALL of my videos. Poo.

SO...is there anyone out there who wants to be in a commercial for C2Kstudios.com? I want to do an ad campaign that asks the question, "What is C2Kstudios.com? With random people on camera saying things like: "it is the dream you were having that night when you woke up the next morning and knew that, if only you could remember what it was, it would change your life forever"... really silly and grandiose things like that. Or if you don't want to be on video just send your ideas to webmaster@c2kstudios.com and I'll put them on cards and just walk around and ask random people to read them out. Should be hilarious.

Posted by webmaster@C2Kstudios at 11:22 AM No comments: