I started Cookbooks From Venus Publishing House in Lake Country BC, in 1996. I had already done some freelance work for a couple of different magazines, and had some poetry published by then, and had decided that being my own boss was the way to go. Within a few months I had a decent revenue stream from the contract I had secured with a local printer, to bring them business for design jobs I was taking from area businesses.

By the Spring of 1997 I was ready to try something new, and I started work on The Lake Country Source, a little coffee shop newsletter promoting local businesses and events. I had moved my operation to the Big City, (Kelowna), and had a contract to print 'The Source through a friend who worked for a larger printing company in town.

The Lake Country Source saw its first issue in the summer of 1997. By the second edition, in the fall, both ad revenue and circulation had doubled. Things were going very well.

Then comedy struck. I say comedy because I can laugh about it now; but at the time, it was pretty tragic. My life for the next six months would be a bad sitcom that would, mercifully, get the axe mid-season. About the time that I was finalizing the third edition of 'The Source, I was contacted by a member of the Kelowna RCMP, who asked if I could illuminate upon the whereabouts of my friend, the one who was doing my printing. It turned out that he was taking jobs, doing the printing during off hours, and pocketing the money. He was doing this all over town, apparently, and it had finally caught up with him. It shed new light on the reason he gave me for needing the money up front.

So my friend, and my money, were in the wind. There would be no third edition of 'The Source. By then I was also in university, and after paying back the money for the unpublished ads, things were pretty tight. I had to get a roommate, who ended up ripping me off. Then there was a flood in my apartment; thankfully the computer was spared but I did lose a lot of other work and files. I decided to cut my losses and concentrate on my schooling.

By the spring of 1998, the show was becoming too painful to watch. Shame on me; I was taken for another big chunk of money by someone I thought was a friend. My engagement had ended. And when my next round of student loans came in for my second year, the bank took most of it to cover the money I had been taken for. So that was the end of that. I'd been cancelled. Summer of 1998 saw me not starting my second year of university, but rather licking my wounds after having to move back into my parents' basement.

That October, I took the Greyhound from Kelowna to Waterloo to surprise a friend for her birthday. We had met on a Canada 125 exchange program back in 1992, when we were still in high school. We ended up falling in love during that visit, and three months later, in January of 1999, I made the move.

On the Day that the World was Supposed to End, I was voted "The Official Clint of the Millennium" by a cadre of my peers, somewhere in the midst of our Y2K celebration. The moniker stuff in a forgotten nook of my craw, until that fateful day that the blinding reality of fatherhood shined to every dark corner of my being and awoke the desire, the ambition, the need...having a child made me want to be a better person, and to do something important with my life. Even if that important thing is just being the best Dad I can be. But I've got all this other stuff going for me, too! That's when C2K.studios was born.

I built my first website in 2006 using Publisher, and an ancient program called PhotoSuite. It was a fun way to send pictures of my new baby to family back home.

It was really bad. In fact, I dare say the first six versions of A's Super Awesome Website shall ne're again see the light of day again.

About a year later, thanks to a very generous benefactor, I made a major upgrade, and started a fresh series of sites using a brand-new computer, FrontPage, and the JASC software bundle that I am still using today.

Being home with my second (and LAST) daughter and getting back into the routine made me realize that I was ready to start designing again for profit again. Being home the first time, there was just too much going on, and everything was so new...not to mention how paranoid I was about every little cry and sniffle. I was as much a mess as she was most of the time!

The second time around was different; for me, anyway. The drive evolved into wanting to do more for the family, not just the baby. It wasn't that I'd been at home too long; but that I needed to be doing something more. Running the family site was quite enjoyable, and most certainly informative. A lot had changed in even just the six years I'd spent at home. I kept up with things as much as could, but obviously, it was just not my priority at the time.

The first thing to do was build the site. That took way longer than originally intended. In conjunction with that began the search for free web hosting, and that search ended with 0000free.com in August of 2010. What a jewel it was! For free hosting, I never had a single (legit ;) complaint.

Production of the site was going along well (albeit slowly), until December; when we left for Christmas vacation. Right after we got back, my Dad ended up in the hospital and we got the worst possible news: the
cancer he had beaten six years before was back. February 2011 saw the site laying forgotten while I started a new project - tracking my family history. It was the only thing I could think of to do, being so far away, to try and give my father the gift of his past; something I knew he knew very little about. As such I didn't have much to go on, especially on his side, but within weeks I had found Dad's long-lost half-sister, and a nephew, and a cousin that my wife had actually known for years! Small world! That, and apparently Robertson's breed like rabbits! I've also found lots of new family on my Mom's side too! Seriously, if you haven't checked out Ancestry.ca, start yourself a free tree and start tracking down some spare kidneys!

Anyway, at some point around the end of that spring I started poking around the idea of working on the site again...and realized that I didn't like it. Not only was the design starting to bug me, but it had become way
too BIG...I decided to start over. I was playing around with Google SketchUp at the time and decided to try doing the site in 3D. I got pretty far into it, and maybe I'll go back to it one day, but I got interrupted again...and by the time I came back to it I had changed my mind again. In August 2011 I dropped the "dot" from C2K.studios and with the launch of the new .com became simply C2Kstudios. I know I can design; so I started to concentrate more on programming and by the start of Autumn 2011 the new C2Kstudios.com (version 2.0) was online.

That brings us to December 2011, and the launch of the Solstice Edition. I had retired FrontPage after scraping version 1.0 of C2K.studios; version 2.0 was built in Expression Web. Granted, they were really easy programs to use, but in computing terms, they're both dinosaurs; and in the meantime I was moving further and farther from XHTML and Javascript and into HTML5 and CSS3.

C2Kstudios v.3.0 was coded from scratch using the freeware version of HTML-Kit and as of March 2012 has a new home at 2freehosting.com. 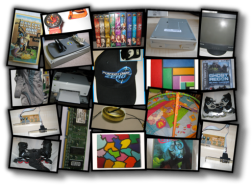